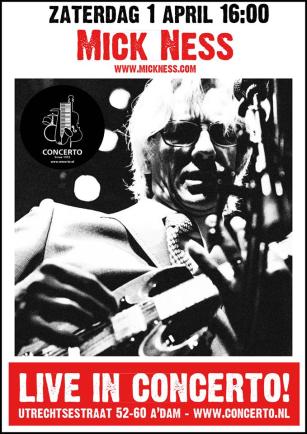 Stakbabber frontman and final Mecano Unlimited member Mick Ness is a musical centipede of sorts. Under the lee of these bands and daily routine for a living, he made a complete album on his own, at some secret hours of borrowed time.

Inspired by old school pioneers, especially the ones who reached for the poles, he assembles his songs mostly handling above the treeline, with great precision. Arctic tales of hopes and hardships.,solitude and brotherhood, flow fluently to one another in a mixture of styles that passed the last decades. Ultralight doom, prog, cold wave, balladry; all in a Madhouse Promenade, as the circle was called around the Belgica, a vessel that got stuck in the frozen sea of Antarctica in 1898 where the sun set on 17 May to rise again on July 23, and made up by Frederick A. Cook, who was aboard, to compel the crew to exercise against insanity. Next to this mental and physical training he changed diet and made some ailing members sit before the heat and light of open fires to defy the harsh conditions.

Mick translated his fascination for the explorers in general, into metaphorical miniatures that delivered this album.

. Design, production and photography was in the reliable hands of his wife and first supporter Kiyomi Yui.

To make it ‘live’ worthwhile Mick is assisted by his oldtime compadre Pieter Bannenberg on drums. The circle seems round, or better said, the ellipse, speaking of the